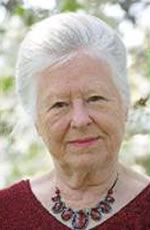 5W Founder, Frances Alexander, died on 7 September 2020 and is mourned by the thousands of women around the world whose lives have been touched by this truly amazing woman.

She has many threads running through her life, including politics and her great passion for protecting the environment, but 5W members remember her for founding their organisation in 1984 and inspiring women to reach out to one another around the world.  Frances will be greatly missed by all who knew her, either personally or through her various works and 5W is proud to have been founded by such an inspiring woman.  Her legacy of friendship and understanding continues with 5W.

To commemorate Frances and recognise her founding of our organisation, it has been decided that a fitting tribute would be the planting of a tree in her favourite park in High Wycombe, together with a commemorative bench, with a plaque dedicated to Frances.  We are sure that members and friends who visit the park will take pleasure in seeing her remembered in this way.

Frances Alexander started Women Welcome Women (as it was known then) in 1984. Her idea to encourage international friendship by enabling women to visit one another in their own homes was publicised in Women of Europe, a magazine of the then EEC. Enquiries soon flooded in and Frances started circulating an up-to-date membership list, which 5W has continued to do as it has grown.

Frances left school to become a nurse and then a midwife. Wanting to break away from health service constraints, she took a teaching course before marrying. When her children were small she started a private nursing agency. This was to be a formative time in her life. She interviewed 600 women in four years, many were qualified nurses who felt apprehensive about returning to work after taking time off to have their children. A bout of meningitis forced the sale of the agency and then there was a nine-year spell of teaching – for the last years as girls’ careers adviser. Part-time teaching then overlapped with setting up Women Welcome Women.

Frances travelled throughout Europe, across N & S America and to Australia, staying all the time with 5W members. Her work for friendship among women all over the world led to her nomination for the 1996 Woman of Europe Award. In October 2001, Frances travelled across the USA, meeting members experiencing the traumatic aftermath of September 11th. In June/July 2002 she travelled in southern Russia, building on those links of friendship and understanding.

Her philosophy of international friendship permeates 5W, now a Company Limited by Guarantee operating as a non-profit Trust. There is also an ethos of increasing women’s self-confidence. In her own words, “Planning to spend a weekend with a member in a nearby country and carrying through that plan, making new friendships, noticing differences of interest in the lifestyles in the foreign country are great ways of gaining self-confidence and becoming articulate.” 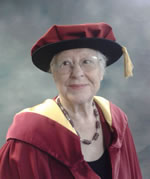 Liberal Democrat politics. She was elected to her local District Council in 1991; following the elections in May 1995 she became chair of their Strategic Policy Board. Her first agenda had items about links with Europe and the Third World. In 1997, she became Chairman of Wycombe District Council and dedicated her year to promote Local Agenda 21 – think globally, act locally! 1998-99 saw her in the 700-year-old role of Mayor of High Wycombe.

Frances had also been Chairman of Governors of a First School in High Wycombe – the first in the UK to institute the Parents as (First) Teachers programme, originating in the USA. PA(F)T recognises that the parent is the child’s first and most influential teacher and helps the parent to be the best teacher he/she can be.

In 2013, Frances was made an Honorary Burgess of the Town of High Wycombe for her many decades of dedication to the town and its people then, in 2014, Bucks New University bestowed an honorary doctorate to recognise the work she had done for the environment. And in 2015, Frances was voted a ‘Local Legend’ along with four other Wycombe ‘Legends’, resulting in an eco-friendly bus being named after her.

Asked why she had been involved in all these things, Frances replied: “I like to see things happen!”